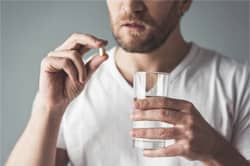 Prescription drug abuse is a growing concern in the United States. In fact, the U.S. Department of Health and Human Services has called opioid abuse (a phenomenon that encompasses prescription painkiller misuse) an epidemic.1 Prescription drugs—whether they are opioids, sedatives, or stimulants—can treat many conditions, but they can also be very addictive. Once someone starts abusing them, it can be very difficult to quit, and the process of quitting becomes even more challenging due to unpleasant withdrawal symptoms.

The withdrawal symptoms for different prescription drugs can range in severity, but they may be fatal in some cases. Treatment at a prescription drug detox center may help reduce the risks of withdrawal and ensure a person’s safety and comfort. After someone completes detox, they should continue with some type of formal drug treatment to help them maintain abstinence and cement their newfound sobriety.

Prescription painkillers help reduce a person’s perception of pain. However, if people use prescription painkillers incorrectly or on a long-term basis, they can develop physical dependence, which means their bodies adapt to the presence of the drug. The development of significant physical dependence often accompanies the onset of addiction. Many people also develop addictions to these medications because they can produce feelings of euphoria.14

The most commonly abused of all prescription medications are opioid painkillers—a group of drugs that includes:5

When people who are dependent on or addicted to painkillers stop using, they may develop withdrawal symptoms. Painkiller withdrawal symptoms can vary by drug and by a person’s physical and psychological makeup, but often include:3

People who relapse after a period of abstinence may be at increased risk of overdose.

The withdrawal timeline varies by drug and individual, but symptoms often begin within a few hours of last use. Acute painkiller withdrawal symptoms usually last 4-10 days in the case of short-acting opioids, such as heroin or codeine, or 10-20 days for long-acting opioids, such as methadone. Some people may experience prolonged withdrawal symptoms that can include strong cravings and feelings of reduced well-being for up to 6 months.6

Withdrawal symptoms alone are not usually lethal. But some of the complications associated with these symptoms can be fatal. For example, people who relapse after a period of abstinence may be at increased risk of overdose because their bodies lose tolerance to the drug.6 In addition, people who experience vomiting or diarrhea can develop complications such as dehydration or lung infection secondary to aspiration of gastric contents.3 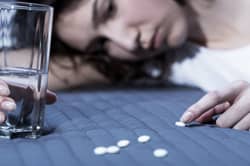 Benzodiazepines are controlled substances that are often used to treat anxiety, panic disorder, and muscle spasms. But they are also used for conditions such as seizures or convulsive disorders, as well as during the alcohol detoxification process.8 They can produce pleasant feelings of calm and relaxation.

Some of the more commonly prescribed benzodiazepines include:8

Users can quickly develop dependence on these drugs when they use them repeatedly. The severity of dependence is influenced greatly by the average dose used, and the frequency of use, as well as the full duration of use. When they stop taking the drug, they may experience benzodiazepine withdrawal symptoms, such as:8

Some of the risks of withdrawal can include seizures or a condition known as delirium tremens, which involves symptoms such as hallucinations, tremors, anxiety, and confusion.8

Stimulants are prescribed to treat certain mental health conditions, such as ADHD (attention-deficit hyperactivity disorder) and narcolepsy (a type of sleep disorder). When used correctly, these drugs are usually safe. However, some people can develop dependence and addiction, especially when the drugs are abused. For example, people might abuse stimulants to get high or remain awake, such as when they are cramming for exams.9

Stimulant withdrawal symptoms can include:5,10

Withdrawal symptoms usually develop within a few hours to a few days after the last use. 10 Symptoms may last for a few days to a few weeks.11

Although stimulant withdrawal symptoms alone are not usually life-threatening, some people may suffer from suicidal thoughts and actions or violent behavior. Further complications from stimulant withdrawal can include intense cravings, severe depression, or self-medication with other drugs, such as alcohol, benzodiazepines, or opioids.

How Detox Centers Can Help 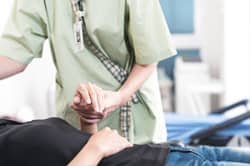 Engaging in a professional detox program may decrease a person’s risk of relapse and help them complete the withdrawal process.

The benefits of professional detox centers include:

The level of care and intensity of detox clinics can vary based on the level of a person’s addiction and dependence. People with severe addictions or who otherwise have been abusing prescription drugs for a prolonged period of time should consider detox treatment in a hospital, standalone detox center, or inpatient facility. These people may have a higher risk of more serious withdrawal symptoms and will benefit from supervision and medical detox management.

People with less severe addictions, who do not suffer from any physical or mental health issues, and who have a strong support system may benefit from detox on an outpatient basis or through assistance from their doctor.

Regardless of the method or setting of detox a person selects, those addicted to prescription drugs will benefit from treatment in a recovery program after they have completed detox. Recovery programs include both residential rehabs and outpatient substance abuse treatment.

Recovery programs provide a number of benefits, such as:12

People might sometimes feel a bit resistant to professional detox because of the costs, or because they feel they can manage their withdrawal alone. But they might not be aware of the risks associated with quitting cold turkey or detoxing at home.

Some of these risks can include:12

Recovery Is Possible.
Call now to speak with a specialist about our treatment options.
1-888-968-9816 Who Answers?
Choose from types of addiction

How Our Helpline Works

For those seeking addiction treatment for themselves or a loved one, the Centers.org helpline is a private and convenient solution.

Calls to any general helpline (non-facility specific 1-8XX numbers) for your visit will be answered by American Addiction Centers (AAC).

We are standing by 24/7 to discuss your treatment options. Our representatives work solely for AAC and will discuss whether an AAC facility may be an option for you.

Our helpline is offered at no cost to you and with no obligation to enter into treatment. Neither Centers.org nor AAC receives any commission or other fee that is dependent upon which treatment provider a visitor may ultimately choose.

For more information on AAC’s commitment to ethical marketing and treatment practices, or to learn more about how to select a treatment provider, visit our About AAC page.

If you wish to explore additional treatment options or connect with a specific rehab center, you can browse top-rated listings, or visit SAMHSA.